Tuesday morning came quickly after my Friday defense: along with several other women, I volunteered to give 5 half-hour presentations to groups of 7th-grade girls. Women connected with SD Mines and various science and engineering firms around Rapid City put together a staggering day of workshops and presentations for 702 girls from western South Dakota. If you don’t know, 12- to 13-year-old girls have an energy all their own and watching them descend on the largely male-dominated campus was a blast.

Armed with my thermos full of black French Roast, I set up my display, visual aids, and interactive pieces seconds before the room flooded with chirping enthusiasm. Wanting to know a bit about my audience, I asked their age, where they attended school, and whether any had considered a career in science or engineering?

After giving a brief background on my own path to engineering, I began by asking students to recall their earth science class and name the three major rock types (igneous, metamorphic, and sedimentary). Then, I handed around two sedimentary rock samples, limestone and shale, so they could see the difference in grain sizes and pore spaces (where the oil hangs out). I also passed around my bottle of real Bakken crude. For a commodity we all depend on, very few have seen it in hand.

We did a comparison of sponges and shales — students had to pick which picture showed pore spaces of a sponge and which picture showed a shale? Smart girls, most picked the correct image every time. Some were shocked that we do not have large caverns or swimming pools of petroleum underground — and even more so that petroleum does not come from dinosaurs but from algal mats.

We covered the mechanics of hydraulic fracturing and did a run through the stratigraphic column (see picture above) starting with Precambrian basement rock and working our way up through thin shales, reservoir rock, overlying sedimentary formations, aquifer (blue glass), and unconsolidated surface material.

Then, to explain what a petroleum economy meant, we listed out as many petroleum products as we could think of: vehicle fuel and propane for heating the home were two obvious answers. Judging from their expressions, that plastic, aspirin, shampoo, and fertilizer are petroleum derivatives surprised them. 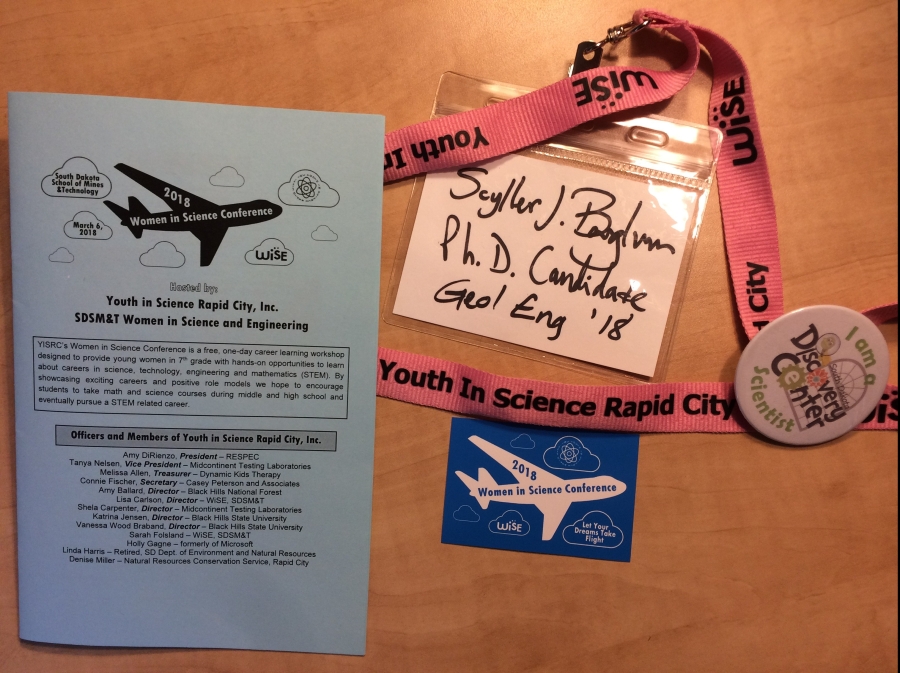 One of my favorite aspects of presenting workshops is finishing with a Q&A “free for all.” Any question is fair game. Students asked about the work I do now, what was it like living in North Dakota during the oil boom, and did I ever have someone tell me I couldn’t do a job because I am a girl?

I finished each session with a call to action: our planet needs all hands on deck. My generation is doing its best to set up for the next generation of problems solvers. We have more problems than we do solutions. We need every kind of thinker and we need brains who have done their homework. I told my young charges to take great care of their brains: no drugs, no tobacco, and don’t drink alcohol until you’re 25 when your brain stops forming.

After each session one or two girls stayed behind to privately ask her question, then darted off to catch up with her group. I reset my visual aids, sat down with my thermos cap full of coffee and prepared for the next round.