Having spent as much time in the lab and machine shop as I have this past year, I can say with confidence, there are two ways to approach your research: 1) throw it all together and hope the assemblage works, or 2) come up with a plan for each piece and test as you go. Working with Steve, and thus exposed to best practices, I do the latter.

The first piece we assembled was the Wheatstone bridge. After arranging the bridge completion modules (BCM) and power supply, I wired the BCMs in parallel and we attached the power cord (cannibalized from some failed piece of equipment).

Next, we attached a strain gage to a flexible strip of metal and let it set (epoxy needs 24 hours).

The metal strip (below) sits on two small tools to allow flexing and resistance changes in the strain gage.

While working on the metal strip and Wheatstone bridge, I also epoxied strain gages to an aluminum 1″ diameter plug (imagine a solid metal cylinder roughly the size of an extra large chapstick tube). The strain gages, or rosettes, measure strain in the vertical, horizontal, and 45 degree angles.

The elastic properties of aluminum are well known which makes it an ideal calibration material. My tests are tensile, not compression, but I can use the modulus of elasticity for compression to confirm that my strain gages (and computer and software) are reading and interpreting strain correctly.

The nail polish is not relevant for this test, no water is involved. My rock samples, though, will be saturated and I do not want the leads to short out. When I asked technical support at Omega Engineering, they suggested nail polish as a water proofing solution. 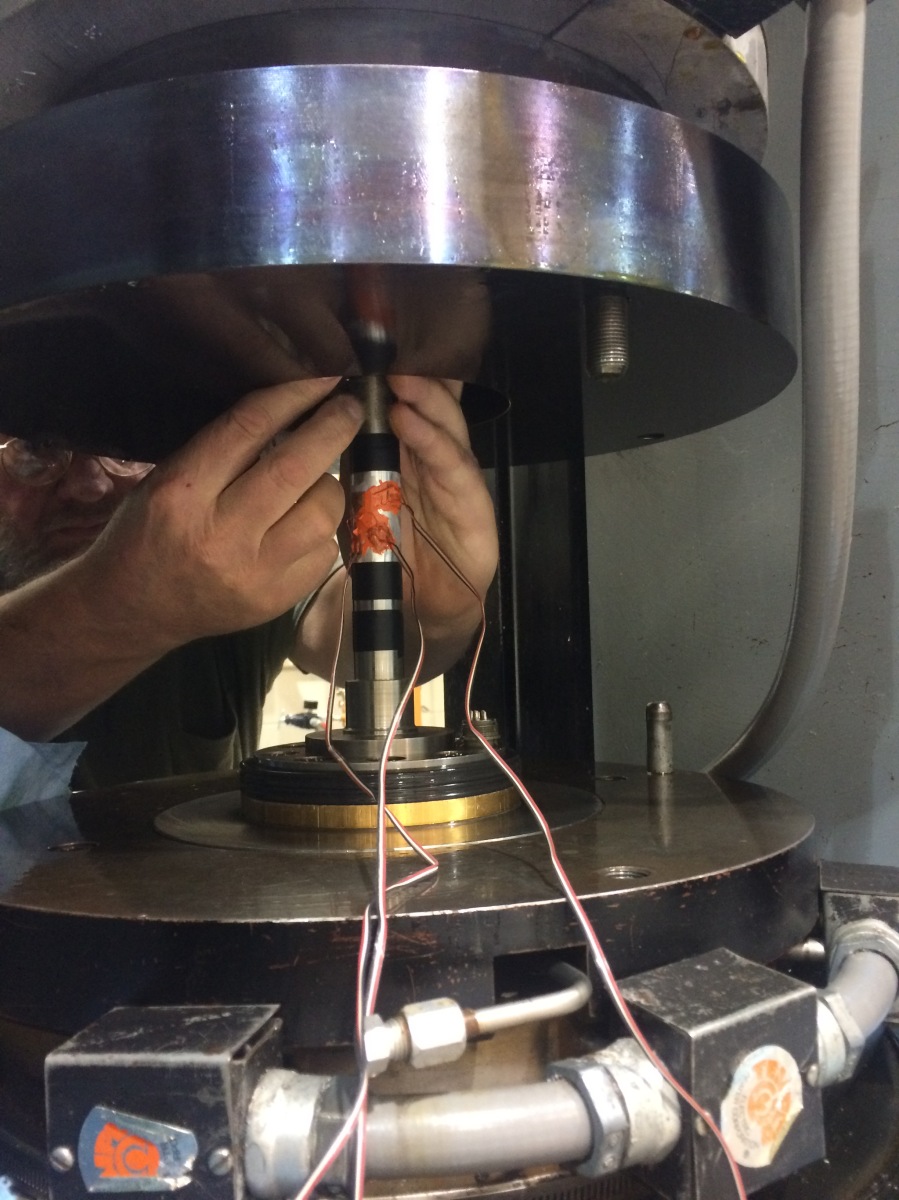 The machine used for compressing my aluminum sample is affectionately known as the “Million Pounder” and hearkens images of the Ol’ 96er that John Candy ate in the movie, The Great Outdoors. This machine, though, was both easily accessible, and… available. So in went the aluminum sample dressed in strain gages, wires, and orange nail polish.

The black electrical tape secured the sample to the platens (see below).

We ended the test successfully and I took the raw recorded data home to process. The information needed is whether or not the strain measured can be lined up with the linear elastic portion of a stress-strain curve for aluminum. I will know this when I plot the data.

Best practices: unplug the Wheatstone bridge any time you are attaching wires to the screw terminals. I learned this lesson in a former life when I sold dimmers (whole home lighting controls) and it remains sound advice in my present adventures.